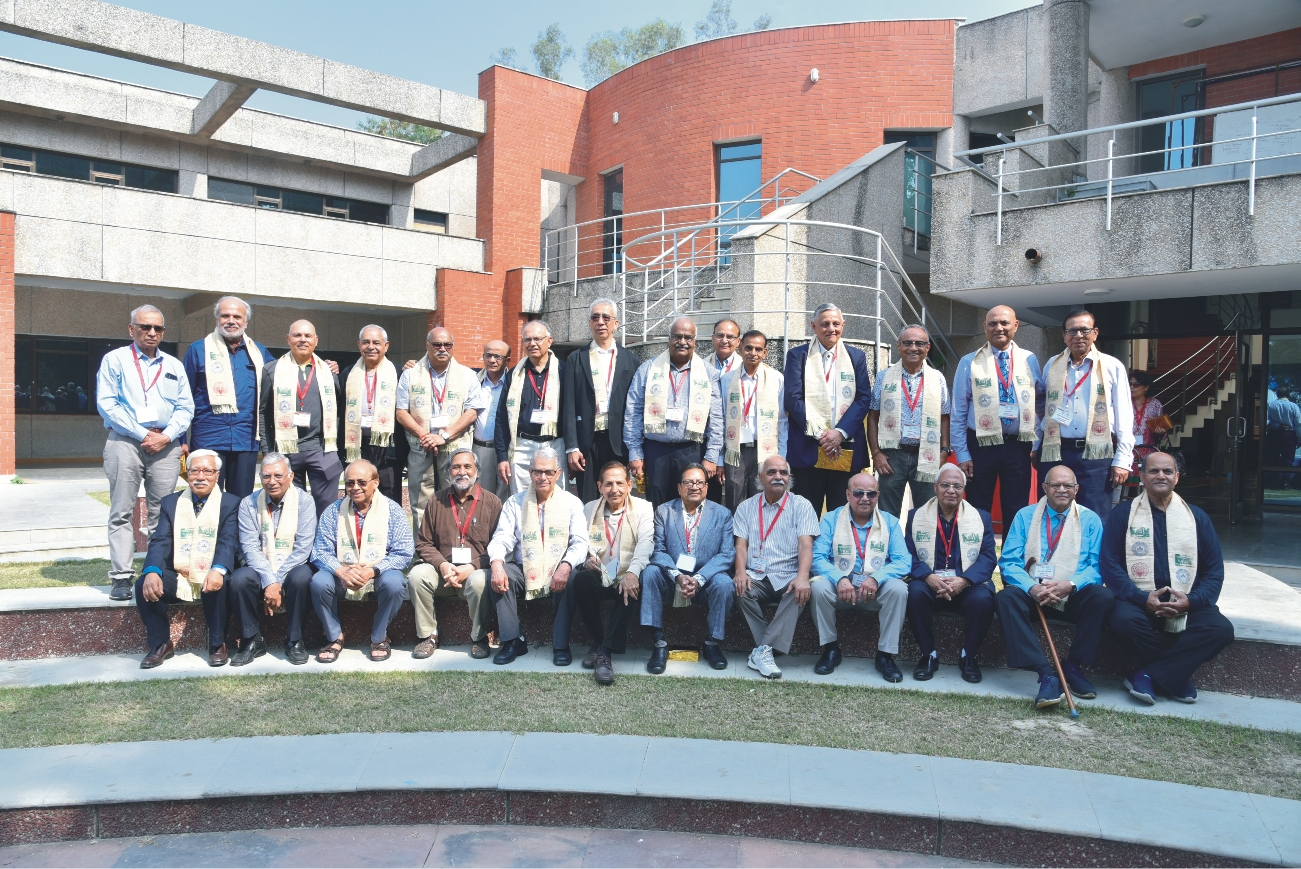 The Golden Jubilee Reunion, 1969 batch (GJR-‘69) was a memorable gathering of some of batch mates from the class of 1964 with spouses to think an look back the 50 years gone-by when we left the IITK.

On Friday, November 08th, 2019, my nostalgia took me back 55 years when on around July 13, 1964 I alighted on Platform # 1 (Kanpur) from the steam locomotive pulled Lucknow-Jhansi “GIP Mail”. It was around 9 am and I remember seeing other lads on the platform seemingly lost in a new world. That was the start of the very exciting journey of life, yes a journey where we ventured into, loved and made it a part of life. “Shishu Pal”, the non-designated CEO of the IITK was at the wheels of the silver-slate coloured Bus with the words “INDIAN INSTITUTE OF TECHNOLOGY” written on the side panels and what a proud moment it was to be part of a Prestigious Institution, the IITK. That was the beginning. And now after a long journey of 55 years we were going to be back to our home, the IIT, it was a feeling of joy and sadness. Joy to be around and sad that several of our batch mates were not with us.

That Friday as we drove in the cabs arranged by the IIT, we kept looking for familiar sites of Kanpur, Murray Crossing, Regal Cinema, Kwality Restaurant, ‘Martin Woo’s’ famous “CHUNG-FA” along the canal, then Phool Bagh, Civil Lines, and the landmark “RAWATPUR STATION” the last building of Kanpur City after which was nothing but empty stretch of wilderness till “KALYANPUR” Railway Station. All these sites were lost as we could see none of these today, only the hustle bustle of crowds, rickshaws, 3 wheelers puffing black fumes and the rest. It was a sad site to see.

Then suddenly the Majestic Gate of the IITK loomed in front after the “still the same railway phatak”. Driving on, my eyes became moist thinking of these lovely 55 years gone by. I looked over at my childhood friend and buddy of over 62 years, Kamlakar “Baura” Dwivedi sitting next to me and even his eyes were lost….such was our GJR.

Winding the security gates, the Welcome Banners put up was so thoughtful. The tarred roads, swaying trees, well laid out crossings were such a lovely sight to see how the campus had changed. Students were seen walking, cycling holding mobiles / iPads /Laptops etc engrossed and I thought those days were better…. No cycles, only transport being the no 11 leg bus. Mobiles and other electronic devices were not even heard of, only a slide rule could be seen with the scholarly types. A real treat to the eyes was to see young girls on the campus. 1964 had a lady wives and a very few faculty, no students so that was a real pleasant and enviable sight.

Here it was the ‘VISITORS HOSTEL” the same as it was then and there were team of volunteers to welcome the “YOUNG OLDIES”. Way back 55 yrs ago, we entered Hall 2 and were allotted rooms (2 to each room) – I was allotted 240 on the FF, middle wing. I remember my Room Mate, Sudhir Sah, a short podgy bespectacled Kumaoni, a serious type. There were introductions around and we all settled down to a comfortable journey ahead. There was some who had already reached the VH and it was such a warm embrace of friends, a few we had not met since 1969. There definitely was some hesitation in recognizing but then there were loud expressions, “Tu, abe “Sale, tu to bilkul badal gaya hai”. Of course there were some who did not change at all, Padma Jyoti, Ashok Manglik, Suresh Prasad Rastogi et all. Most of us forgot the lady wives were waiting to meet the “Family” they had heard so much about. Wthout much ado, we put the luggage in the rooms and immediately were off to the mess. Here ore introductions took place and before one could realize, we were back to the same lingo as was 55 years ago…was it not a way to feel the depth of nostalgia???

The team of volunteers were helping out with registration kits, attending to any needs, making us feel comfortable. Being the Batch Co-ordinator, I was privileged to be allotted a Double Room which I thought was luxury till I it became the meeting room for all. By the evening most of us had checked in and in all, we were 28 Alumni, 23 spouses and 2 Alumni wives in the group. Friday evening was when we really started exchanging out lives beyond the IIT. The lady wives also sat around and it was great to see them exchanging smiles and it seemed they had known each other for years. The ladies mixed together so well and it was great to see them engrossed in all their tales. By the late evening, they even stated to sing and to converse as one family. It was a real treat to see them gel so well, they developed bonds as if they were having a Reunion them selves. Such was the ‘Bonhmie’ created in the atmosphere in the IIT. The place held an AURA that only the guys of yesteryears could fathom, there was nothing stopping us to feel the new entrants to the IITK except that instead of the Hall 2, we were in the VH, well looked after by the volunteers, who deserve every credit. Our talks went on late into the night and it was not every single one of us was up chatting.

Saturday morning was the main Day. For Breakfast we went to the ‘Hall 1 Mess’ where we were treated to the famous Aloo Parantha with Dahi etc. It was a time to remember how we used to rush in to finish the same in time and then off to L1/L3. We also interacted with the students who were thrilled to learn these oldies sat in this mess 55 years ago. We walked the corridors where we roamed then and even went to our rooms to remember those days. This was all nostalgia of nearly 55 years.

Soon after Breakfast we were well dressed for the Directors Welcome at the “Outreach Hall”. Everyone with ladies was seated in total silence, each one filled with memories of L1/L3, the Library or the Computer Lab, where we used to spend our time. Prof Karandikar along with Prof Jayant Singh were there to welcome us and mixed around before the formal start. Lighting of the lamp was done and it included the lady wives. Prof Jayant welcomed the Alumni and the Director, who then gave a short PPT on the achievements and progress of the IITK. This was well received. On behalf of the Alumni I got the opportunity to thank the Director and the IIK AA for the opportunity for us to be there and the warm welcome accorded. Then came the moment of PIN DROP Silence as we stood in a 2 minute silence remembering our friends who have passed on. This followed by two other Alumni speaking in remembrance. What followed is something that really summarized our IIT family.

“Mala Chandra”, wife of our Batch Topper, Ashok Chandra, walked to the stage and she spoke from the heart, something that I cannot forget. Among the other shares of the life of Ashok, she said that he spoke so much about his IIT ‘family’ that sometimes she felt she was not part of him. She wondered what was this “family” he kept referring about and TODAY she really realized what he meant by his ‘FAMILY”. Truly this WAS HIS FAMILY and then she closed her eyes, looked up and said in a solemn voice: “Ashok I’m with your family and wish you could have joined them. Am so happy to be a part of it”. To me this really and truly summarized our REUNION GJR and strengthened to bond within. Thank you Mala.

Lunch was followed by the Photography session where almost everyone was busy getting their pictures taken with friends and family and time spent was so nice and friendly. By the evening we were again treated to a nice evening when the IIT students entertained us with their singing and was fun that Prof Jayant and his team joined in too, so also several Alumni and spouses participated in singing, reciting or just sharing their thoughts. An evening of leisure, good food and a chance to interact with the young students. It went into late night and every one enjoyed the informal, laid back atmosphere where everyone was at ease.

Sunday, November 10th was the day when it was time to say bid ‘adieu’ to each other. Every one was at the main door of the VH when some left. It was a time to say “Thank You and Lovely to see you’ and yes, WE’LL MEET AGAIN IN 2024, right here at the VH, Inshallah!!!!. Departures were staggered as some left for Lucknow to catch flights, other by train and flight or even to go home to their families in town. A handful stayed on for another night of relaxation at the VH. By the evening we were all immersed in thoughts of the 3 days we spent together, how we mixed as also the ladies gelled together.

It was a moment that we got to spend with the “FAMILY” n a wish to be there again in 2024, to meet again and to live it up

Thanks to the Director and all the staff and volunteers of the IITK to make our visit to the Home of our teens into the twenties a memorable one. Thank you friends and see you again soon. God Bless